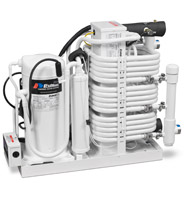 Aboard Sanctuary, our normal summer and winter locations are mostly in brackish waters. Local water temperatures rise into the mid-to-high 80s in the summer months. Routine preventive maintenance is required to avoid the build-up of sea growth in the raw water circulation plumbing system.

The water that is circulated through heat pump plumbing systems is not biologically sterile. It is drawn from the environmental water in which the boat is floating. That water is referred to as environmental, or “raw” water.

The maintenance issue in systems that circulate environmental “raw” water becomes the efficiency of heat transfer into and out of the circulating water. The efficiency of the transfer of heat into and out of circulating raw water can be impaired by any accumulation of slime, algae and other biological “critters” attached to, and living on, the internal surfaces of raw water plumbing system components. At its minimum, slime acts like an insulating blanket which impairs heat transfer. In its worst case, it can build up to the point that it also occludes the lumen of the plumbing through which raw water circulates, acting like an insulating blanket AND decreasing water flow through the system.

To clean environmental biologicals from raw water plumbing fouled with sea growth, a couple of approaches can be tried, in order. Raw water circulator pumps are high volume, low pressure pumps. As a first step, if you have the capability to do so, close the intake thruhull, and swap a relatively higher pressure dockside fresh water hose to the raw water loop to the heat pump. Do this just “downstream” of the circulator pump; i.e., at the discharge port of the pump. The higher pressure of the dockside water may be sufficient to blow fouling material out of the raw water cooling loop system. If this works, it’s less harsh than circulating chemical cleaning agents in the system. If not, though, remove the dockside water hose and restore the circulator pump connection. Re-open the cooling water thruhull, and prime the pump. The next step is to place pool chlorine or bromine high test hypochlorite tablets (HTH) into the sea strainer basket. 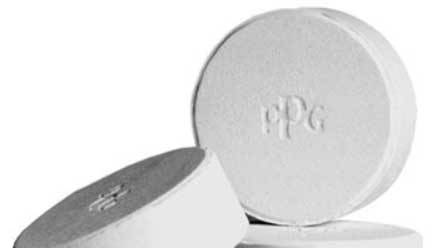 Aboard Sanctuary, to control the growth of slime, algae and other sea life in the “raw” water loop of our two air conditioning heat pumps, we have used HTH pool “chlorine” tablets for several years. The tablets are about the diameter of a Kennedy half-dollar, and about 5/16″ – 3/8″ thick. We put as many of them as will fit into the sea strainer basket that supplies “raw” water to the air conditioners, and we then just run the units as normal. These HTH pellets dissolve over 24 – 36 hours. HTH works by releasing elemental oxygen into the raw water. The elemental oxygen is a powerful oxidizing agent that kills and shrinks slime and other sea-life critters in the raw water loop. That allows the little corpses to slough off of internal plumbing surfaces and flow out of the system. Physically clean surfaces allow better contact of raw water with the internal metal parts of the condenser/evaporator (cool/heat respectively) coils of the air conditioning unit, which increases heat transfer efficiency.

We perform this preventive maintenance procedure once or twice per season.

We do not use the HTH tablets in our genset or propulsion engine cooling circuits. Doing so for the genset and the propulsion engine(s) would require them to be running to circulate the chemical. With engine(s) not running, no raw water circulates and no cleaning would occur. Also, the efficiency of heat transfer is not an equivalent issue with engines, and is not necessary, in engine cooling systems.

I hasten to add: “not necessary, in my opinion.” There are significant design differences between air conditioning/heat pump raw water cooling systems and an engine’s raw water cooling system. In air conditioning systems, water flow is constant over a relatively small heat transfer surface area. Furthermore, in the first few minutes of operation, the temperature differential normalizes to a very steady state. Contact efficiency is very important to heat transfer. In engine cooling systems, flow is variable (with engine speeds) over a relatively high surface area. In engine systems, the amount of heat shed in the raw water cooling circuit varies widely, and the proportionate temperature differential is much higher. In engine cooling systems with high temperature differentials, the importance of contact efficiency is lessened. By and large, the capacity of engine cooling systems is significantly over-sized with respect to their nominal operating requirements. That large capacity accommodates extremes that may be encountered in severe operation. Again, there is no analog to those severe operating conditions in air conditioning system design. So, the two systems are very different.

One common misconception is that calcium deposits will foul air conditioning and engine cooling systems. That is largely an “old wives tale,” often implied and promoted by product advertising. Yes, there are minerals in solution in sea water. Yes, those minerals can and do coat internal hose and metal lumen channels of raw water loops. But except under the most extreme situations, mineral deposits do not account for significant fouling of marine cooling systems. If they did, salt water would be a severe and ever-present disaster. Slime, algae, sea worms and barnacles – living sea creatures – are the problem. These critters grow quickly in warm sea water, foul plumbing lumens and impair heat transfer. It just so happens that de-mineralizing agents – RydLyme®, Lime-A-Way®, muriatic acid, hydrochloric acid – will also clean out slime, worms and dissolve the shells of barnacles and other sea critters. But, these agents are caustic in varying degrees to the internal metals of raw water-carrying loops, caustic to use safely, caustic to dispose of properly and safely, and generally “overkill” on a “fitness-for-purpose” scale. Free elemental oxygen, like that released by HTH, will kill biologicals without adversely affecting hoses, tubing, copper/nickel metals, etc. and they are generally safer for people to use and dispose of safely.

It is my opinion that HTH is the best first-use agent, and I suggest it as the primary, routine course of preventive maintenance. Reserve the caustic stuff for the less common, more intense and serious, corrective-action situations.