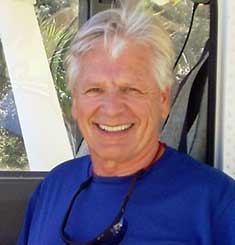 Herman grew up in the Netherlands, where being out on the water and being around boats was the natural thing to do.

He then became a marine engineer and with this background he traveled and worked in South America, Africa, and Jamaica. During the 70’s Herman ended up in the USA working for one of the larger multi-national corporations that needed project engineers to manage their super tanker fleet.

As a yacht broker, Herman’s background experience can be of great value to our clients, whether it’s in selling or buying a yacht.