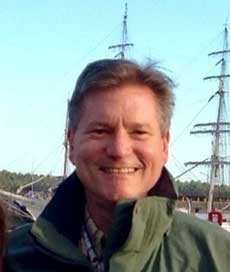 A native of Miami, Florida Jason grew up around boats and boating. He started sailing at the Coconut Grove Sailing Club at the age of 8 and got his first boat, a sunfish, at 11. He worked for his father, a professional yacht captain, 7 summers running from the age of 14; working out of Jones Boat Yard and Richard Bertram Yacht Yard, maintaining Trumpy, Burger and Feadship motor yachts.

A graduate of Florida State University and study programs in London, England and Urbino, Italy, Jason moved to Washington DC to attend graduate school at George Washington University; followed by a career in international distribution with a focus on consultative sales, marketing and contract negotiation.

A long-time resident of the Annapolis, Maryland, Jason is a member of the Chesapeake Yacht Club and an Eastport Yacht Club alumnus. Jason cruised the Chesapeake for 10 years aboard his Columbia 10.7, before becoming an avid racer; participating in the Pirates Cove Race Club’s Wednesday night series on the West River, as well as various CBYRA Bay races for the last 23 seasons. After teaching his sons to sail aboard their Hunter 27, Jason and his family can now be found cruising the Chesapeake aboard their Beneteau 381.

We are pleased this seasoned sales professional and life-long boating enthusiast has joined our team here at Curtis Stokes Associates; where he is focused on helping sellers find the right buyer and buyers find right boat.