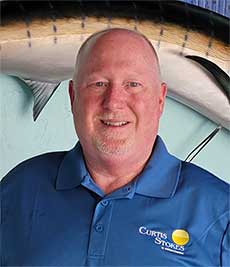 Ted was born in Oklahoma and raised throughout the east coast including New England, Michigan, Ohio, North Carolina and Florida. He spent most of his summers in Northern Michigan where he fell in love with boating and sailing on Lake Michigan. He eventually settled down in Fort Lauderdale, Florida where he and his wife Shannon enjoyed the South Florida lifestyle including boating, fishing and a passion for scuba diving. While living on the New River in Fort Lauderdale, Ted owned several boats from center console fishing boats to small cabin cruisers.

For nearly 30 years, Ted owned Palm Beach Confections, a chocolate retail and manufacturing company, which he built from the ground up. He operated retail chocolate stores throughout Florida including Miami, Fort Lauderdale, West Palm Beach, Orlando and Tampa. After selling his business, Ted has enjoyed a career in the automotive industry specializing in sales and finance.

Ted is an avid boater and loves spending time on the water. He is looking forward to completing America’s Great Loop sometime in the future. Ted is a graduate of the Florida Yacht Broker Institute and is a member of AGLCA, MTOA and PADI. He is also a past member of the Fort Lauderdale Chapter of the US Power Squadron where he was an active participant.

Ted and Shannon have three grown children. Addison is a Physician’s Assistant currently living in Atlantic Beach, Florida. Kyle is an attorney living in Washington DC but working for a West Palm Beach firm. Jake is a student at the University of Florida in Gainesville, Florida.

Ted is willing to go the extra mile for his clients by being meticulous in his research. He strives to find a great match between each buyer and vessel. He works out of Stuart, Florida and can be reached by calling 561-929-3199 or by email at ted@curtisstokes.net.